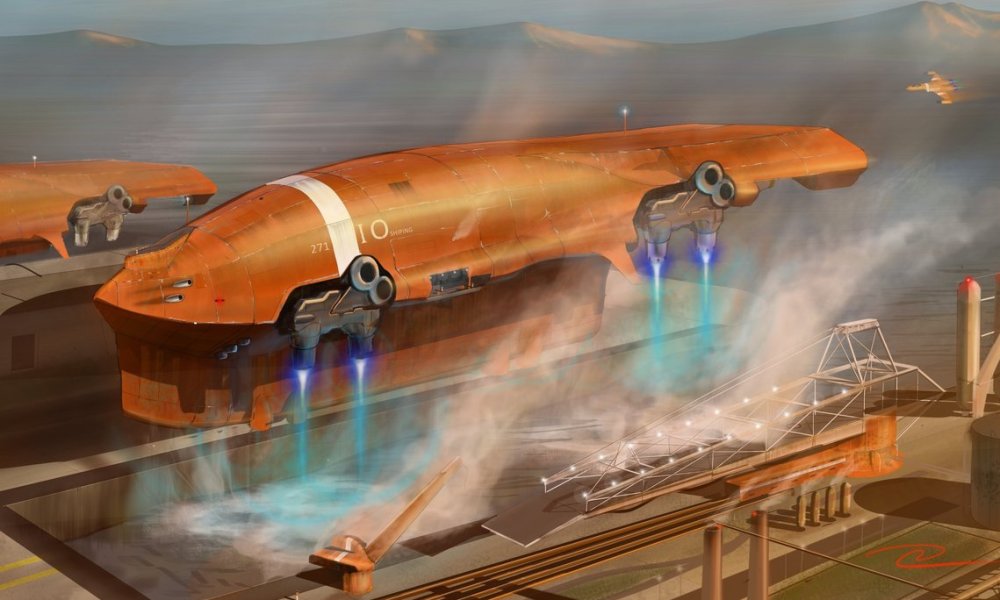 As a continuation to my story last week, here’s more of desolate Eden and the arrival of some unexpected visitors. As for a name, I believe I may have found one in Homeworld, but these things can always change.

I watch the sun rise over Eden’s rust red hills, there’s iron in the earth, or so they say, but no one came out here for iron. It’s too early in the morning for my liking and I yawn, rubbing the sleep from my eyes. Feeling naked without my armour, I set off for Locke’s Town – this is a Sara day – I’m no mercenary or anyone else, just a big sister looking out for her brother on an inhospitable rock.

The journey doesn’t take long and I park my speeder in the shade of one of the ugly, squat houses before dismounting. Once, millions of years ago, this planet had jungles and wildlife all of its own. There had been great oceans and waterfalls which soared for miles but then the planet’s sun had expanded, destroying everything and leaving only a barren wasteland. Looking around, I can only imagine what it must have been like to wake up and see a world of plants and trees, animals too.

Now we live off hydroponics farms and get meat once every couple of months, if we’re lucky and the Core Worlds are feeling generous. I hope Aaron’s going to be alright, he always is, but he’s fearless; sometimes I forget how young he is. I hate leaving him alone for so long but we can’t afford a droid to keep him company and he has his games and vids. One of these days I should make him read something.

The town’s busy despite how early it is with everyone taking advantage of the cool morning to do business. I look around the market but there’s nothing new as far as I can tell, the shipments from the Core have been sporadic over the last few months and when they have come, they’ve rarely brought anything worth buying. Still, it’ll be Aaron’s birthday soon, and I have to get him something.

Passing a sadly empty meat stall, I see Garrett and my heart stops. He doesn’t know it was me. I start breathing again and press forward, he calls for me but I pretend I can’t hear him until he catches up and plants a hand on my shoulder. I tense but can’t ignore him and turn, a smile on my face I hope isn’t too false. “Hi Garrett, what’s up?”

“Well, that’s the thing,” his voice is deep and rich, I often joke that if anyone ever decides to narrate my life, I want it to be him. “There’s a lot going on and I could do with some help. Running the bar all by myself is tough and you’re… well, you’re just about the only person in this town I’d trust to do it when I’m not there. You won’t drink me dry, will you?”

I laugh and shake my head, “I’ve seen what drink does to too many people around here.” He must be going after Kgill, to exchange himself for his brother? I almost tell him but I can’t. “You’re offering me a job?”

10 credits is a lot of money, it might mean I can give up my other work and it’d explain how I’m able to afford to stay out of town with Aaron. I’m about to reply when the market begins to shake. Items fall off stalls and someone screams, only a major ship coming in to land would cause something like this.

Some of the traders bolt down their goods, I can hear people shouting about soldiers. As I run towards the door I slide over a table, knocking over piles of cheap jewellery, angry curses are hurled at me but I ignore them and burst into the street. Instead of a single ship, there are four, all of them bearing the seal of the Intersolar Federation of New Earth – that’s the Core to you and me.

Not quite the present I had in mind for Aaron.